Rare Photography by Donald A. Hall, Sr. with Aerograph Studios’

The historic photographs of the Spirit of St. Louis, created by its engineer Donald A. Hall Sr., are available in a special section on our friend and photography artist’s website in the Donald A. Hall Photo Archive.

Gallery will open in an NEW WINDOW 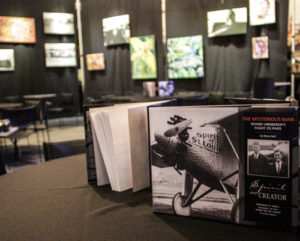 In 2012, John Slemp photographed the Lindbergh Awards dinner at Florida’s Fantasy of Flight for the Charles and Anne Morrow Lindbergh Foundation. It was there that he first met Nova Hall and saw the abbreviated Flying Over Time exhibition of art and historic aviation images discovered in the Rose Chest in 1999. Surrounded by Kermit Week’s aircraft collection, the magical event was hosted by well-known aerobatic pilot Sean Tucker, with speakers Erik Lindbergh, etc.

Over time, Nova and John became friends.  Aerographs, John Slemp’s photography studio supports Flying Over Time’s educational mission and the Lindbergh Foundation.  Thus with Aerographs, we use the best commercial photographic processor in the industry to offer the highest quality historic photos, from the original negatives. These ultra rare photographs by Donald A. Hall, Sr. capture in 1927 the Chief Engineer’s perspective of the construction of the Spirit of St. Louis as it has never before been seen. Both in scale and clarity.

While engineering the design, Donald A. Hall, Sr. also doubled as the parts inspector of the Spirit of St. Louis aircraft.

Since the work crews were tasked with working through the night on the New York to Paris Project (NYP), Mr. Hall would show up 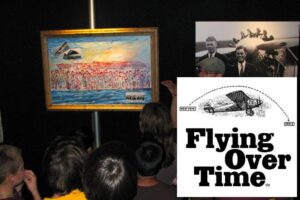 Teaching the ASU Prep kids at ASU West campus in 2011

early in the mornings at the old fish cannery workshop and photograph the newly finished parts/progress. There he would give critiques immediately or accepting the work that production manager Hawley Bowlus was directing. On many occasions, Donald A. Hall, Sr. would also work through the night. With multiple 24+ hour stretches needed to guide the effort, 90 hour work weeks became common for the young engineer. His camera became an important tool during the job that would later make him, the company, and Charles Lindbergh famous. The 100+ stunning photos created during the marathon 60-day period of the building and testing of the Spirit of St. Louis are published in the book, Spirit and Creator: The Mysterious Man behind the Spirit of St. Louis by Nova Hall.

Examples of these beautiful photographs include: The Wing Series, the Wright Whirlwind Series, and numerous other landing gear, frame, and internal structure series.

The men and women who built, designed, funded, and flew the Spirit of St. Louis in San Diego, CA 1927

The soon to-be-released, CG Photos Series was the proof of design for Donald A. Hall. Designed and engineered onscrap paper because of a lack of time, and later transferred to the lost NYP-2 Blue Prints, the plane proved to be a tough aircraft capable of the New York to Paris flight.

Before it was brought out to Dutch Flats, the final assembly was a special subject for the Chief Engineer’s lenses in the bright San Diego sun. These many images recorded the photographic creativity and engineering talent throughout this period of Donald A. Hall’s life.  Mr. Hall photographed with his still unknown European camera, the Leica, capturing uniquely wide views aided by three screw-on lenses.  The unusual wide format and sharpness from the original film negatives have never before been available.

Each photo is unique and composed professionally just prior to the successful flight of Charles Lindbergh. This can be seen in the Spirit of St. Louis photography and later during his Sierra Nevada backpacking trips. Donald A. Hall’s original images of Santa Monica prior to 1927 tell a story of a sandy beach town at the edge of the Pacific, in stark contrast to the modern city of today.

Photography Archive of the Donald A. Hall Estate 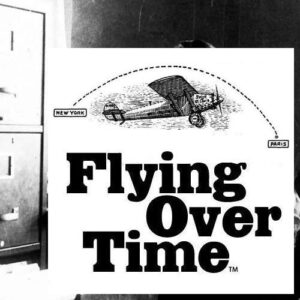 Donald A. Hall Sr. at work

The Donald A. Hall Photo archive, part of the Donald A. Hall Estate, includes over 900 photos in total, from the city of his birth in Brooklyn, to his Army Air Corp training days in Texas, scenes in Arizona, and later the war years in San Diego, where he passed away in 1968.

Purchase a part of history, and receive a Certificate of Authenticity, along with the official signature logo of the Donald A. Hall estate. Each gift you give will support S.T.E.M. education around the nation. Sixty percent of every purchased print, produced on archival paper, will be tax-deductible. Aerographs and Flying Over Time have also agreed that a portion of each sale will go to the Lindbergh Foundation to support their environmental technology mission. ( Buy Now: the Donald A. Hall, Sr. Photo Archive)

About the talented Mr. John Slemp:

It’s been a fast twenty years, but that’s how long I’ve been a commercial photographer, after almost 11 years in the US Army. Photography became a passion while stationed in Germany, and has since dominated many waking hours. I love making pictures, especially so for clients that appreciate the effort, and the art, that goes into crafting an image. I suppose it’s the mixture of the two that really gets my juices flowing, as it never ceases to be a challenge. While comfortable creating images in the studio, we really enjoy working on location, as the allure of the outdoor world is hard to beat and the endless variety offers an ever changing tableau from which to choose.  Available for commercial assignments, private commissions, collaborative photo-collage paintings of historic aircraft with Nova Hall, and consultations.

Professional Affiliations include: the American Society of Media Photographers and the International Society for Aviation Photography

John is a former member of the ASMP National Board, and is an active member of EAA and AOPA.

John’s aviation work was selected for inclusion in the Best of ASMP in 2008, one of only twenty professional portfolios so chosen, of over 400 submitted for consideration.

Donate to protect the Donald A. Hall story!